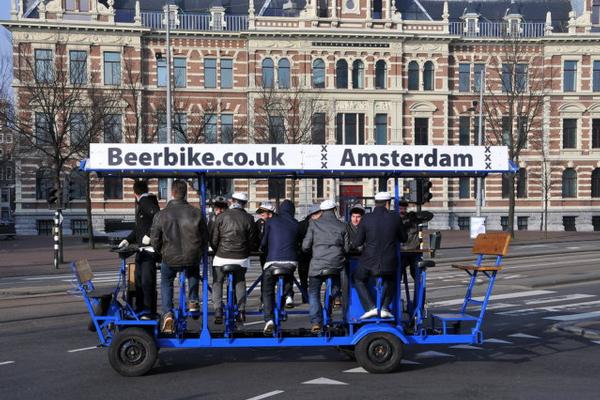 The city of Amsterdam is targeting unruly tourists with a new law prohibiting bicycle rides with beer in the city center.

Not to be confused with a guided, leisurely bike ride through the countryside that includes a few carefully curated stops at local breweries, Amsterdam Beer Bikes are 12 (or more) vehicles that are basically equipped to serve as mobile bars.

Beer bikes, increasingly popular in urban destinations around the world, allow participants to see the area from the comfort of their own bar stool / bike seat as long as they continue to pedal. And since there’s a barrel on board, it’s pretty easy to experience the destination through an alcohol-fueled haze.

But, according to locals, bicycles are a nuisance.

Not only are they large and bulky, blocking traffic in some of the most populous urban areas, but they also attract often noisy participants, if not worse. Some scream and scream, some urinate in public, while others still wreak havoc on residences in the area.

A resident caught a group of tourists on beer bikes ripping up the shrubs in front of his house.

“This stuff happens all the time,” she said. The Guardian. â€œIt’s worse when they throw up in your plant boxes because you can’t rinse them – you have to take them out. “

Now Amsterdam is rife. On Wednesday, he imposed a ban throughout the city center, after ruling against four companies that offer the service, reports the New York Post.

“The ban is justified because of the combination of traffic jams, disorderly behavior and an overcrowded city center,” the court ruling noted.

Amsterdam has aggressively pitched a number of ideas in an attempt to curb its ever-growing number of inbound tourists, including the possibility of increasing its tourist tax and it is not the only European city struggling with the side effects of ‘too many tourists. Barcelona have also put in place many initiatives to curb loud and noisy crowds.

To help prevent what is often referred to as tourism, tour operator Intrepid Travel has launched a new campaign focused on off-season travel and revealing new or more “off the beaten track” tourist spots.