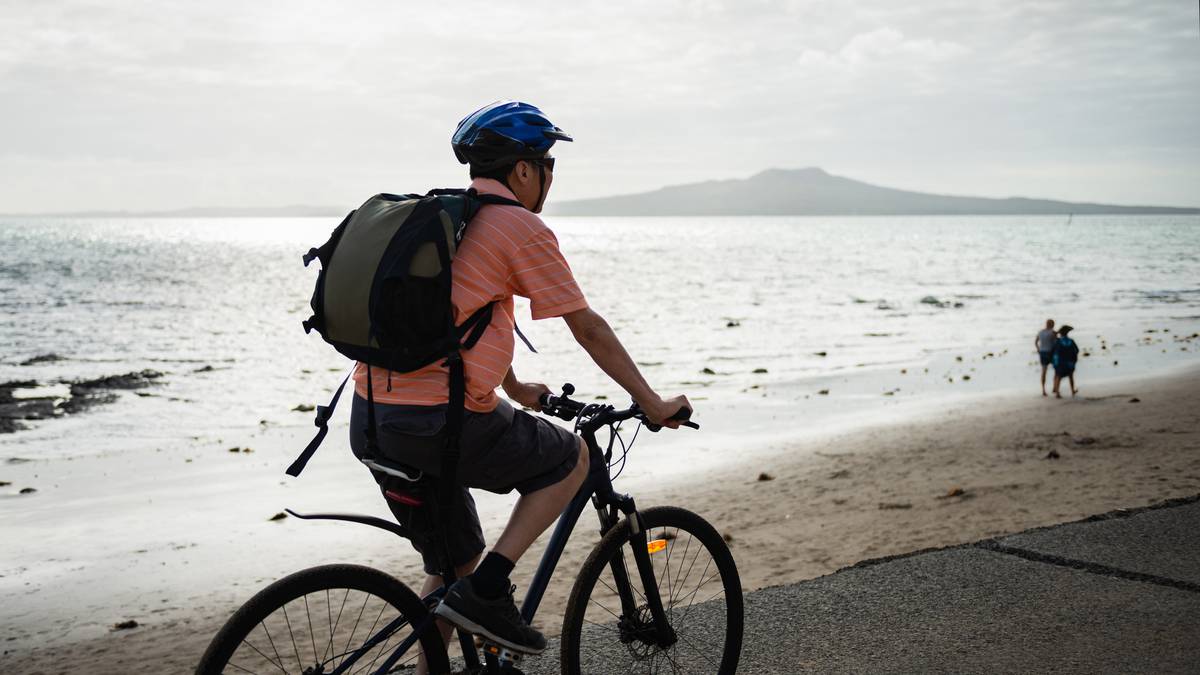 Auckland’s North Shore has a lot to offer the urban cyclist. Photo / Getty

Need a new pocket of Auckland to explore during lockdown and beyond? The North Shore has a lot to offer the urban cyclist, writes Eleanor Hughes

Fifteen minutes after leaving Auckland CBD, we arrive at Birkenhead Wharf, get off the bikes from the ferry and exit the terminal. Across the water, a silvery conveyor belt stretches like a slide from the salmon-pink Chelsea sugar refinery to where ships dock to unload sugar. To the left, I can make out the north-west highway, the WaitÄkere Ranges looming beyond. The ferry begins its return trip, we start ours.

The PÅhutukawa flourish in Hinemoa Park. We walk past, changing speed as Hinemoa Street goes up. Between the early 20th century and modern homes, I see Rangitoto in the distance before turning right into Wakanui Street. An eye-catching villa with a red brick fireplace, bay window and white veranda sits around the corner. Still right, and we descend Maritime Terrace into Little Shoal Bay where, in the large grassy reserve, we enjoy the sun on a bench facing the water. The prows of moored yachts point towards the Harbor Bridge, flags fluttering atop its arch.

Maritime Terrace becomes Council Terrace and the leg muscles scream as they go up. Turning right onto Rodney Rd, I pass white palisades facing old wooden bungalows and the white Masonic Lodge, erected in 1912. It is blank, the Masonic compass and the square symbol on blue circles decorating its area. white door, Wedgewood blue stairs leading to the door.

It’s another right on the more bustling Queen Street where luckily there is a bike path. The Methodist Church built in 1901 on the corner of Stafford Rd and Queen St is cute with arched windows and doors; a rosette-shaped window at its gable. The Spick-and-Span cottages are right next door.

A few patrons sit at tables and chairs at Clarence Road Eatery next to the Bridgeway Cinema, formerly known as the Onewa Picture Drome. Foliage creeps up an exterior wall of the old post office opposite, built in 1929, now The Engine Room restaurant. Charming wooden villas from the late 1800s and early 1900s dot the street, adorning their verandas with songs; mature trees shade parts of the trails. Without cars, it feels like stepping back in time.

I can imagine women in lively skirts on the white, wood-railed balconies of the two-story Northcote Tavern overlooking Queen and King Streets. â€œNorthcote Hotel Licensed to Sell Fermented Liquors and Spiritsâ€ is painted under a black lantern on the wall facing Queen Street. A hotel in the late 1890s, built to accommodate ferry passengers, it became a tavern once the Harbor Bridge was built in 1959, beds were no longer needed. At the outdoor tables, all but one of the umbrellas remain rolled up, but as the summer continues to heat up, they will undoubtedly all be open.

You reach a roundabout and keep left, then turn right into rue Alma. Imposing plane trees form a green tunnel along its entire length, with villas behind. Beautiful.

Turning right onto Princes St takes us past a concrete wall indicating “Auckland Harbor Bridge 1959 1969”. It’s dark and rather ugly under the bridge among the concrete supporting pillars, some almost in the front yards of colonial houses.

Further below, towards the tip of the Stokes Point reserve, steel beams crisscross the superstructure; like a giant Meccano system. A carved, waka-shaped whenua louse stands near where the bridge leaves the land and crosses the water supported by huge concrete pillars rising from the depths.

On the way back we travel the length of Princes St where many houses are without garages, built before the advent of the car. A purple jacaranda blooms outside the villa at no. 53. One to the right takes us coasting onto Beach Rd and another right onto Sulfur Beach Rd. The PÅhutukawa line on one side, oncoming traffic on the bridge rushes to the other. We reach the water level and pass under the bridge, leading to the parking lot of the Sulfur Beach reserve. In 1878, a sulfur factory opened here.

Lockers of green canoes stretch along the waterfront, a panorama of the CBD skyline at their end. Up the stairs to a stone retaining wall down to the water, we have lunch looking out across Shoal Bay; The Rangitoto Peaks beyond Devonport, to the left are the Takapuna skyscrapers.

We take a path along the freeway, the water on our right, to the Sulfur Point freeway underpass and come to Tennyson St. Turning right onto Alfred St and left onto Milton Rd, we go up slightly to Richmond Ave, one-story Victorian villas straight ahead. We turn left, pass no. 12 – apparently the scene of a murder a long time ago – hang straight on Bartley St and return to the engine room on its corner.

Hooked left onto Queen St, this time we veer right at the roundabout and go downhill at full speed. The iconic 1970s building, once known as Fisherman’s Wharf Restaurant, is perched in the back. I’ve never seen it before except from above, crossing the harbor bridge.

Our two and a half hour journey, through parts of the north coast that I have never visited before, ends on the left side of Northcote Point Wharf to wait for the ferry back to the south shore of the harbor.

Best tips
A heritage trail brochure, â€œNorthcote Point Walkâ€, is available at aucklandcouncil.govt.nz/arts-culture-heritage/heritage-walks-places/Documents/northcote-point-heritage-walk.pdf and details some of the buildings seen on the way.

Check alert level restrictions and advice from the Department of Health before traveling. covid19.govt.nz