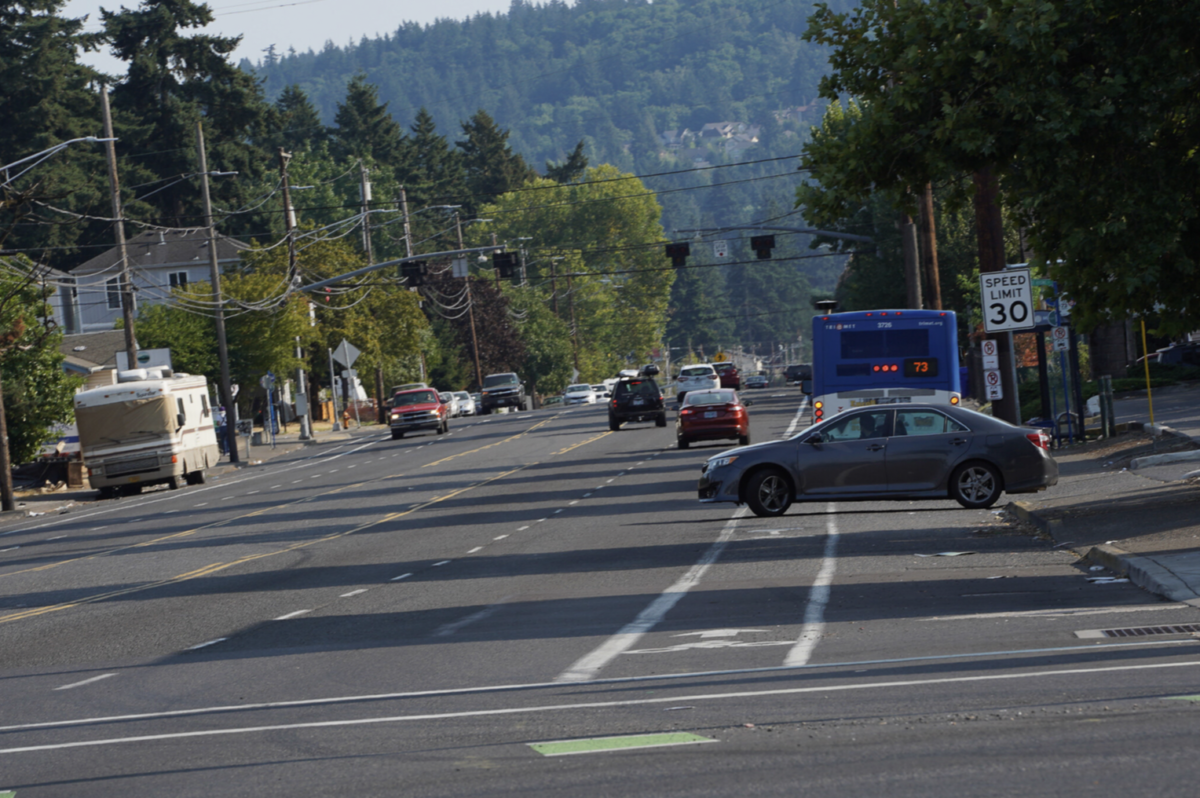 A plan to update 122nd Ave in East Portland has taken a big step forward. After nearly a year of collecting feedback, the Portland Bureau of Transportation has released 122nd Ave project plan draft. It includes our first look at roundabout concepts and other big changes that could finally tame this street.

122nd Ave is one of Portland’s most dangerous corridors for people walking, biking, or taking public transportation. The PBOT readily admits that there are major safety issues on the street: in the draft plan, they state that “the wide roadway has inadequate infrastructure and its large intersections are among the most dangerous in the city. Significant changes are needed to save lives and reduce life-changing injuries.

Right now the 122nd is on PBOT High Crash Network, and it is generally unpleasant to walk or cycle on. PBOT’s goal is for 122nd Ave to not only be a safe place for pedestrians and cyclists, but also to become a “civic corridor,” which the city defines as an “attractive and safe street for pedestrians.” while continuing to play. a major role in the City’s transportation system.

The PBOT identified four categories of recommendations in the plan:

● Securitywhich will involve “redesigning the 122nd to achieve safe driving speeds, safe intersections and better separation between users” and will include projects such as the installation of more public lighting and pedestrian and bicycle crossings and improve speed management

● Develop 122nd Avenue as a civic corridor to “exemplify the benefits of green infrastructure and minimize urban heat island effects, while being pleasant places to live, work and gather” by widening sidewalks, increasing tree canopy cover and exploring the potential for bus rapid transit service on 122nd Avenue

As we reported in March, canopy cover was a particularly important issue for survey respondents. Shade from trees is essential in high-pavement areas like the 122nd Avenue corridor. During last year’s heat wave, parts of east Portland recorded temperatures of up to 124°F.

For the purposes of this plan, PBOT has divided the long corridor into three parts. In the northernmost segment, which stretches from Marine Drive to San Rafael Street, the PBOT unveiled plans to make major changes near the Sandy Boulevard (Highway 30) intersection.

Currently, there are two free-flowing ramp routes from 122nd south of Sandy that provide access to 121st NE. PBOT suggests closing these lanes to create T-junctions. The concept presented in the draft plan also calls for new sidewalks and marked crossings.

Below is the current view of this intersection and the conceptual design of PBOT:

Another notable recommendation is for the south segment of 122nd, where PBOT wants to reduce the space available for drivers.

We outlined potential PBOT design options for this southern stretch in a recent article, but the draft plan brings something new to the table: a roundabout at the intersection of 122nd and SE Harold made possible by reducing traffic lanes.

“We’re looking at a bigger change on the streets,” PBOT planner Bryan Poole said during a June 14 bicycle advisory committee presentation. “Because the volumes are lower, we are proposing here to do a road diet: reduce the number of vehicle lanes from five to three, provide space to really improve the cycling facilities and also add trees along the road. hallway, which we’ve heard a lot about.”

Here’s what it would look like under current conditions:

The PBOT design drawing shows how drivers would cope with a much narrower roadway than they currently do, which would significantly reduce speed and improve everyone’s safety. Median islands and elongated bends would slow down drivers when entering the roundabout. Bike lanes are shown as being raised to curb level and would cross next to crosswalks.

Roundabouts on main streets are extremely rare in Portland. Sharing this concept shows that PBOT is ready to take bold steps to change how our streets are used and who will feel safe using them.

The next step is for the PBOT to find more money to implement these recommendations. You can help create urgency for this by sharing your feedback via the 122nd Ave Plan online survey. Find the full plan and learn more about the plan on the PBOT website.

Taylor has been BikePortland’s editor since November 2021. She has also written for Street Roots and Eugene Weekly. Contact her at [email protected]